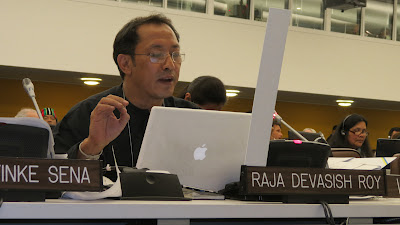 With regard to "impartiality", "fairness" and "transparency" (also referred to in article 27 of the UNDRIP), there are challenges, on account of the dictatorial and discriminatory attitude of the non-indigenous chairperson of the CHT Land Commission, says Raja Devasish Roy, member of the United Nations Permanent Forum on Issues. “These dysfunctionalities will be addressed through legal amendments and the appointment of a more competent and impartial person as chairperson, however, he hoped.

Mr. Roy, also circle chief of Chakma circle, expressed his opinion during the discussion Agenda Item 3 on “The Doctrine of Discovery: its enduring impact on indigenous peoples and the right to redress for past conquests (articles 28 and 37of the United Nations Declaration on the Rights of Indigenous Peoples” on 2nd Day of the 11th session of the UNPFII (on 8 May 2012) which was started 7 May 2012 at the United Nations Headquarters in New York.

Mr. Roy also said that in theory, the lands, territories and natural resources of the states also belong "to the people". The challenge, however, is that, among the population of most states, indigenous peoples remain on the margins of power, law-making and policy-making. Even where indigenous peoples constitute a significant percentage of the population of the state or its different parts, their economic marginality and the dynamics of competing interest groups and money-oriented party-based electoral politics result in their exclusion from major policy-making processes.

He also said that the Land Commission in the Chittagong Hill Tracts, came about on the basis of an accord between the Government of Bangladesh and the indigenous people's party, JSS, in 1997. The CHT Accord was - if I may remind participants here - the subject of a study at this Forum's 10th session (E/C.19/2011/6). Although the law establishing the commission still awaits further amendment to make it conform more faithfully to the provisions of the 1997 Accord, it encompasses several of the principles mentioned in article 27 of the UN Declaration. The commission includes a majority of indigenous persons ("in conjunction with indigenous peoples"; "indigenous peoples have the right to participate in such process"); it is obliged to adjudicate in accordance with the "laws, customs and practices of the CHT"; ("giving due recognition to the indigenous peoples' laws, traditions, customs and land tenure systems"); and its rulings will have the statu! s of that of a civil court of law ("independent"). With regard to "impartiality", "fairness" and "transparency" (also referred to in article 27, UNDRIP), there are challenges, on account of the dictatorial and discriminatory attitude of the commission's non-indigenous chairperson, but it is hoped that these dysfunctionalities will be addressed through legal amendments and the appointment of a more competent and impartial person as chairperson. Bodies such as the CHT Commissions are crucial for restitution and other redress for violated land rights on account of the limitations of adversarial mainstream justice systems, which seldom provide efficacious remedies to indigenous peoples. The Chittagong Hill Tracts is also another example of a crisis of implementation of a modern-day treaty, as also the violation of a historical treaty of the Chakma king with the British East India Company, in 1785.

Following is the full statement of Raja Devasish Roy:

RDR-Dscvry
Posted by CHT NEWS UPDATE at 9:01 AM