Besides, the army also took positions at Dudya Para and Holdiya Para
in Laxmichari Sadar Union.

“The soldiers are still there and the operation is ongoing.” a
villager told chtnews.com on condition of anonymity.

He said a sense of insecurity and panic was prevailing in the area.

According to sources, the army last night surrounded the house of Ula
Aung Marma and Laxmi Sen Chakma in the village of Kudukchari para in
Laxmichari.

They woke up the inmates and interrogated about UPDF activists.

Military operations have also been reported from Rajstali in Rangamati district.

The army set up a makeshift camp at Taithong Para yesterday, according
to sources.

According to sources, on 25 January, at about 7pm, a group of army
personnel led by Nazmul, commander of Subolong camp, carried out an
operation in areas adjacent to Subolong bazaar and arrested the UPDF
men from a house.

The army took them to the camp and tortured them severely.

The next day, 26 January, the army placed rickety arms in their hands
and then handed them over to the police.

A false case has been filed against them under Arms Act.

Sona Moni Chakma, a UPDF leader, condemned the arrest, saying: ‘It was
a part of a government plan to weaken UPDF.’

It is learnt that a Bengali Muslim student named Abu Siddique is going to get admission in Kustia Islamic University under tribal quota.

3000 education centres of indigenous peoples about to stop in CHT

3000 education centres of indigenous peoples about to stop in CHT
Four residential schools and three thousand and five hundred education centres of indigenous peoples across the CHT are about to stop due to non-extension of the ongoing project or non-approval to any new proposal.
Under this circumstance, in the current academic session around 150 SSC candidates’ future is about to end up in uncertainty. Due to non-extension of the project’s period, the education for more than 700 students, who are living in the residential hostels and 68000 children in the remote areas, is under severe threat.
The period of the Integrated Community Development Project (ICDP) expired on the 31 December 2011. Following this situation, the residential students were asked to leave hostels and stay at their homes until the further instructions. The supply of food for the SSC candidates had been stopped, as the food supply order from the contractor was suspended.
The officials of the Chittagong Hill Tracts Development Board (CHTDB) and the ICDP reported that a new project with the total expenditure of Tk. 34.8 million was submitted to the government. They also added that as an interim arrangement a request was made to the Planning Minister for no-cost extension up to six months in order for keeping the project operational.  Until 15 January 2012 none of the said proposals got approval.
This five year project was initiated in 1985, when it was revised twice. The project’s period also was extended twice, and the duration ended in 31 December 2010. With a special grant support from UNICEF, this project was implemented until 31 December last year, but no prior approval was received for the further extension of it.
The Project Director of ICDP S M Zakir Hossain tells that it takes only three months for extension of a project under the “no-cost extension” provision. A few days back, a proposal was sent to the Planning Ministry; however, no initiative was taken yet.
Zakir Hossain also added that a Core Committee has been formed comprising a few officials both from the Ministry of CHT Affairs (MoCHTA) and the CHTDB to formulate a new proposal under the ICDP. Following several rounds of meetings, on last 29 December, a 5 year project proposal with Tk. 34.8 million was submitted to the concerned ministry. Tk. 18.6 million from the government and Tk. 16.2 million from UNICEF are expected to finance this project.  He also says that UNICEF in principle has agreed to support the project, although no memorandum of understanding (MoU) has been signed with it yet. Co-financed by the government and UNICEP, the CHTDB has been implementing activities under the ICDP on education, and maternal health and child care in Bandarban, Rangamati and Khagrachari Hill districts.
The additional Project Director Jane Alam tells that 116 teaching and non-teaching staff for 700 indigenous students in the residential schools, 228 project employees, and 3500 village workers are employed in this project. Jane Alam also says, through the village centres more than 68000 children are provided with pre-school education. Alongside these centres are providing the maternal health and primary child care facilities including Vitamin A and iron tablets for children.
It was alleged that such uncertainty with the project extension resulted from the lack of preparation well before on the side of the concerned officers. However, S M Zakir Hossain denied this allegation.
Zakir Hossain says, although the project period has been over, still there remains Tk. 3.4 million unspent from the total budget allocation. Subject to the approval from the Planning Ministry, all project activities can be continued for next 6 months without any support either from the government or UNICEF.
In the meantime, news spreads around that no students will be admitted for the next year intake in several schools such as Mro Residential School in Sualok Upazila, Ruma Tribal Residential School in Ruma Upazila, Alikadam Tribal Residential School and Rajasthali Tribal Residential School in Rangamati, while residential students were also asked to leave the hostel. In this situation, indigenous leaders and concerned guardians are now anxious about the fate of their children’s education.
(This report has been prepared as per the news published in the Bangla daily ‘Kaler Kantho’ on 15 January 2012).
----------
courtesy: Kapaeeng Foundation
Posted by CHT NEWS UPDATE at 9:12 AM 0 comments

4th meeting of the CHT Accord Implementation Committee held in Dhaka

4th meeting of the CHT Accord Implementation Committee held in Dhaka
On 22 January 2012 4th meeting of the Committee was held at the office of Deputy Leader at Jatiya Sangsad Bhaban in Dhaka with its convenor Syeda Sajeda Chowdhury in the chair. Other two members of the Committee president of PCJSS Jyotirindra Bodhipriya Larma and chairman of the Task Force on Rehabilitation of returnee refugees and IDPs Jatindra Lal Tripura MP attended the meeting. Besides, Gowher Rizvi, advisor on international affairs to the Prime Minister was also present in this meeting.
Among others, it was decided to amend the CHT Land Dispute Resolution Commission Act 2001 as per recommendations of CHT Regional Council and CHT Affairs Ministry in the next winter session of the Parliament. Besides, the implementation of other issues of the Accord was also discussed in this meeting.
It is mentionable that this year earmarks the passing of 14 years since the signing of the CHT Accord. Meanwhile, the present Grand Alliance Government led by Awami League that signed the Accord has already consumed almost 3 years of its tenure. But as of today, except reconstitution of some committees and appointment to the some posts, the government has not stepped up any measure that is effective towards implementation of the Accord. Despite its prioritized commitment in the Election Manifesto and continued strong demand of the Jumma peoples and the civic society of the country, the government has not come up with a time-framed ‘Road Map’ directing to implementation of the CHT Accord, 1997.
Very recently government started up dialogue with the PCJSS for ways forward of implementation of CHT Accord. Earlier, two meetings were held recently between Mr. Larma, president of PCJSS and chairman of CHT Regional Council and Mr. Rizvi, advisor on international affairs to the Prime Minister. Lastly on 16 January 2012 meeting between Mr. Larma and Prime Minister Sheikh Hasina was held.
--------------------------------
courtesy: PCJSS
Posted by CHT NEWS UPDATE at 8:59 AM 0 comments 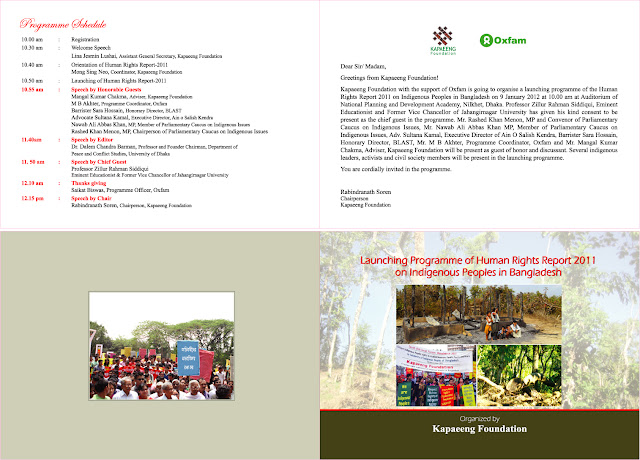 An American citizen, Thomas Christian Eskildsen, left Bandarban town in the morning, on January 3rd, after he was ordered by the district administration to leave, Kaler Kantho and Suprobhat Bangladesh have reported.
On January 4th, the two vernacular dailies carried reports saying that Mr. Thomas was expelled on account of unwarranted activities.
The Suprobhat Bangladesh, published from Chittagong, quoted Md. Imtiaz Ahmed, officer-in-charge (OC) of Bandraban Thana, and Md. Mostafiz, a DB official, as saying: ‘American national Mr. Thomas held secret meetings with hill peoples at Tripura Kalyan Samiti office after entering Bandarban without prior permission from the district administration and the law enforcing agencies.’
‘As he failed to (show) any document giving him permission to visit Bandarban and as he failed to justify his visit, he was ordered to leave.’ it added.
The paper said that the police had earlier cautioned him after he was found involved in controversial activities with hill people in a Khumi village in Ruma.
However, according to Kaler Kantho, Mr. Thomas came to Bandarban on Monday at the invitation of Bibortan, an NGO, and with permission from Deputy Commissioner.
‘Members of the National Security Intelligence (NSI) picked him up in the evening while he was speaking with indigenous people at a tea shop in Ujanipara of Bandarban town.’ the national daily said.
‘He was interrogated intensely but the result of the interrogation could not be known.’ it added.
The paper further said that Mr. Thomas Christian had checked out of Royal Hotel on Tuesday morning and left Bandarban town.